Organization for a large family... 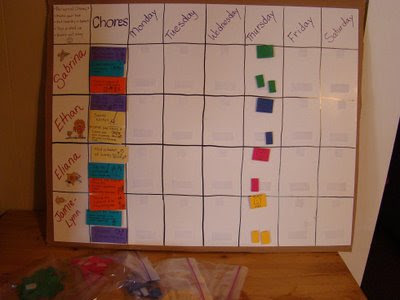 Well I've really done it now! I have spent hours and hours thinking about how to get my kids to do more chores; I researched on the Internet how to make it happen; I've even read the books about raising responsible children!

Now I'm trying to put this all into action and I've created a chore chart for our family, so there is a sense of motivation and achievement when the kids help out around the house.

Here are the main principles. First, I will give the children allowance every week. I don't like the idea of "paying" the kids to do work around the house when they are part of the family, and we all must work together to keep things going. For example, I would not withhold allowance from a child who had broken his/her arm and couldn't help out in the house that week.

However... there needs to be some motivation. Here's where the parental ingenuity comes into play. I would like to see these chores done by a certain time every day... say 12 noon. So in order to motivate the kids to do it on their own, there is a catch. If their chore has not been completed by the pre-determined time, it becomes open game to be assigned either to another child or to myself. In that case, at the end of the week, the child who was supposed to do it has to pay, out of their allowance, the person who completed the chore in their place. Ouch! So... here's hoping it all works. The bonus to this methodology is that if a child is being lazy and doesn't do a chore, it isn't going to be left undone until the next day. Instead, there is great motivation for another child to pick up the task and complete it... because they can make extra $$$!

So onto the chart. All in all it cost me an hour or so of planning, about $4 in supplies and somewhere in the neighborhood of 4 hours to make. I used velcro strips that I bought at Walmart, which I then glue-gunned onto the colored poster paper and the white poster board. Each of the different chores are movable so that I can assign each child a different set of chores each week. Also notable, each child has a specific color for their "personal chores badge" and the "markers" for couple of chores they do every day.

Personal Chores: There are certain daily tasks that I would expect the children to do everyday... chore chart or not. I've been trying to implement these over the past few months, by having a sign on the inside of their bedroom doors that tells what they need to do before they leave the room in the morning to have breakfast. There are four simple tasks: Make bed, pick up laundry, clean up toys and put away any books. As it relates to the new chore chart, I've made a daily "happy face" that each child can stick in their spot for that day of the week once they've completed their "personal chores".

Daily chores: Each child can see their daily chores next to their name on the chart. There are 2 daily chores, and 1 weekly chore. I will likely assign that the weekly chores get done on a certain day, probably near the beginning of the week. Once their chore is completed, they place one of their colored markers on the velcro spot for that day. So each day, they should be placing 2 markers, except for the day that they also complete the weekly chore.

On the occasion that the child does not complete their chore, for example if Ethan did one of Sabrina's Tuesday chores, Ethan would place one of Sabrina's colored markers in his Tuesday spot (so then he would have 2 of his color, and one of hers). That way, at the end of the week, we would see that Sabrina owes him money because he did one of her chores.

I think that covers the workings of my new chore chart. I know that the next few weeks will be a lot of effort to implement this new system, but it should really pay off in the end! That's actually the reason why I decided to wait until summer to get something like this going... that way when we get back into homeschooling this fall, it should be running smoothly without much prodding from me! Cross your fingers for me!
Posted by happymummy at 12:54 PM

Hey, great minds think alike! I just posted about chores on my blog too, lol I'm trying something new too. How's your system going?