When my first baby was born, nearly 12 years ago, I was an uncommonly calm and relaxed mother.  Certainly, I did my duty and took prenatal vitamins faithfully, read all the important baby books, took my newborn to her routine check-ups and vaccinated her and I paid close attention to all the developmental milestones.  Frankly, I've strayed far off the path of "normal" and now my parenting looks a far cry from what it did in it's early years - not that I neglect my children in any way, but I'm not as "protective" and cautious as I once was.

Even so, I never took protectiveness to the extreme.  I've know such parents, who ascribe to rigid schedules of feedings, bathing and educational stimulation.  They sterilize, organize and continually verbalize (in at least 2 languages) in order to guarantee their child's healthy, successful development and growth.   This is the parent who painstakingly follows his/her child around with disinfectant and antibacterial spray, guarding precious little Suzie or Johnny from germs, dirt and other harmful objects.  If a toy drops from the baby's hand onto the floor, it is quickly whisked away, to be dutifully sterilized before being returned to the toy shelf.  To be honest, I became so lax that my baby's soother could be on the floor for a day or two and I'd have no problem popping it into their mouth!  (Hey, don't be shocked... doesn't that promote their natural immunity?)

As little Suzie grows up, it becomes apparent that she is the victim of an over-protective parent.  Never allowed to play outside alone, never allowed to talk to the mailman, grocery store clerk or even the zit-faced teen at the McDonald's counter, Suzie is sheltered and cloistered away from the "big, bad, scary world".  This is the child who must wear full-body protective gear when bicycling or riding on his scooter.  When all the other boys are wearing cut-off jeans and just their helmets as they bike up and down the street on a hot, sunny day, poor Johnny has elbow pads, knee pads, shin guards, and a full-face helmet.  Oh... and Mom is on the porch with her eagle eyes to keep watch for bad guys who might show up in the neighborhood.  And when Johnny stops by the house, she jumps up, wipes his nose with a tissue that she pulls out of her pocket and asks:  "Are you sure you're not over-exerting yourself, sweetheart?" 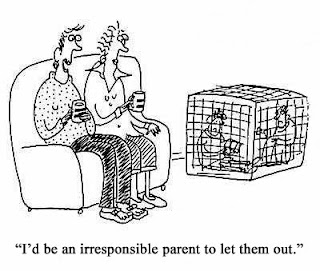 Sure, as parents, we desire to shield our kids from harm.  In fact, on a daily basis I make choices to safeguard my kids and to prevent them from suffering the consequences of inappropriate situations.  Yet there came a time when I had to "let go" a little, and show some trust and confidence in my kids.  I even have learned to let my kids make the occasional mistake... so they can then learn from the consequences.  I let my toddler run around with wobbly exuberance even though I know he will occasionally fall and end up with a few bumps and bruises.  I even let him climb onto things,  to a certain degree, knowing that when he gets himself into a position that is "scary" for him - like on top of our big, king-sized bed, he'll have to ask for help to get down, and perhaps learn his limitations!

I've even found that homeschooling brings it's own challenges regarding protectiveness, in that I decide how to grade and score my children's work.  For a while, I felt badly about marking an "X" on my children's work, as if it would damage their emotional well-being... Over time, I've learned that making mistakes is a part of life, and recognizing that you have done wrong is the first step in improvement!  My kids have to own up to their behavior, and if they have incomplete work, I don't shield them from it - but I try to patiently guide them to amend their work so they can learn and better themselves.

Extreme cases of over-protectiveness result in children who never fully mature.  These are the kids (adults, actually) whose parents bail them out, time and time again, despite their age and capability to care for themselves. I'm talking about an able-bodied human being who lives with his parents and can't hold down a steady job; sleeps-in every day and stays up late, playing video games - and I would argue that this is not entirely his fault.  Somehow, this behavior has been continually enabled and supported.  This is an extreme case, of course, and obviously is unhealthy for both the parent and the grown-up child.  The problem is, it's not for lack of love that an adult turns out this way.  In most cases, the mother (and sometimes father) are exceptionally loving towards their child.  In fact, they care SO MUCH that they just don't want anything bad to happen to their child.  They don't want them to know the hurts and pains of reality - they don't want them to know humiliation, rejection or for their child to experience the pain of lack.  (Like lacking designer jeans..., or the latest video game... or 'spending money' for pizza and beer...)  If you argued with this parent and told them that "if you really loved your child, you wouldn't enable them.." it may take a while for this concept to actually sink in because they feel they have done nothing but love their child!

I think we can all agree that healthy parenting involves a certain measure of restraint when it comes to allowing our children to experience the consequences of their behavior.  Consequences make excellent teachers.  As parents, we ought to allow our children to learn valuable lessons from their actions.

Something I realized recently was how my idea of God really doesn't line up with this simple parenting principle.  I think we often expect and desire for God to act like an over-protective parent.  We want Him to shield us from EVERY painful consequence, no matter how responsible we are for our individual actions.  We blame Him when things don't go the way we want, even though the results line up with our behavior.  We get mad or become hard-hearted, thinking that God doesn't really love us, and that He's actually a cold-hearted monster in the sky for allowing hardship into our lives.  Now, I'm not trying to address tragedy and the horrible atrocities that this sinful world contains.  So don't get the idea that I'm saying "God wanted your brother to die in a car accident so you could learn a lesson" or something ridiculous like that.   I'm talking more along the lines of dealing with your personal finances, or troubles with relationships or even personal issues which you have allowed to slide over time, and now you're feeling like you've been dealt an unfair hand in life.  Often we look up at God with accusation and think: "Why don't you change this problem!?"  We question the struggle, and don't see the lesson and opportunity for development that is knocking at our door.

My thought is this:  If God made our lives easy and perfect (which couldn't happen anyway due to our imperfections..) then how would we ever learn, grow, develop and mature?  Sure, there are times when I feel overwhelmed and frustrated and hurt.  But if God were to treat me in the manner of an overprotective parent, cushioning me in a bubble of cotton fluff to prevent me from ever being poked, stretched, challenged or hurt - who would I become?  I'd be that spoiled, over-grown child; bloated with a sense of entitlement and selfishness.

Realistically, I believe that God does shelter us from our actions a lot more than we could ever think or comprehend.  Having children, I know for certain that my kids really do use up the work-hours of their guardian angels... considering how many almost-poked-out-eyes and should-have-been-broken bones we've encountered as a family.  Even more so, I'm certain that God has prevented some horrible situations in my life.  I sense His leading and protection on a continual basis and I know that what I've received is far better than I deserve!

The thought I really wanted to express, was the idea of God as a parent.  Whatever it is that you expect from God, and whatever attributes you have ascribed to Him, must be filtered through the idea of a wise, loving, perfect parent who desires to see us mature and grow and develop.  I believe it hurts him when He sees us make mistakes - in the same way that I hurt when my children make poor choices.  That doesn't mean I stop them from all of their mistakes, though.  I understand the importance of growth by accountability.  I hold my kids accountable when appropriate, and bail them out when appropriate.  It may seem a bit lame, but there is plenty of truth in the saying: No pain, no gain!  Like it or not, there are times in my life where I will be challenged - it doesn't mean God doesn't like me and isn't watching out for me; in fact it actually is a sign that He LOVES me and is cheering me on, as I journey towards maturity.
Posted by happymummy at 4:35 PM