There are two sides to a super-hero story.

First there are those who yearn to be saved by that knight in shining armor or the handsome, muscly man in red or yellow or blue tights, namely the common folk who are oppressed or in danger.  Then there are those who secretly wish to be that hero; the underdog who came out of nowhere, who was bestowed a super-human gift of strength (or some other extraordinary ability) and becomes the awe and inspiration of the downtrodden. 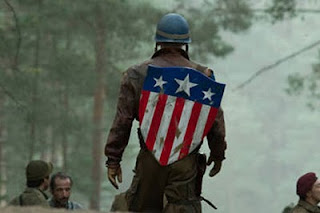 My hubby and I went to the cheap theater and saw Captain America last night.  Now before you laugh and dismiss my blog posting because you think that movie was "so lame" or predictable, I must say with all honesty that I quite enjoyed the movie and it sparked a deeper message within my heart, beyond the money-making, mindless entertainment than I expect the producers intended.

Right off the bat, you are reluctantly drawn into the story of the good-hearted yet scrawny young man named Stephen, who wishes, more than anything, to become enlisted in the army during WWII.  He's so awkward, nerdy and dejected, in fact, that I found myself impatient for the part of the movie where they change him into something great;  transforming his body into that of a full-grown, good-looking man so I wouldn't have to wince at his puny stature and all-around pathetic-ness.

I won't get too much into the story, but based on Stephen's character, not his physical stature, he is finally accepted into the army.  The night before the procedure, the scientist (who pulled the strings to get Stephen accepted) explains that he has chosen him to be transformed into the super-soldier because what matters most is Stephen's heart.  Stephen understands what it is like to be weak, and will not forget it.  His objective is not power and control, but compassion for those bullied by the Nazis.

The next morning, Stephen is taken to a top-secret laboratory, strapped into a machine with tubes and wires and all sorts of fantastical gadgets, and there is success:  In walked a shrimp - out walks an over-sized Calvin-Klein jeans model (not like the waifs that are favored these days, but a manly-looking man with a six pack and bulging biceps). Stephen's new-found strength is immediately put to the test with twists and turns of conspiracy (as can be expected) that cause this honest, genuinely caring American boy to transform into a hero, overnight!

I won't get any further into the story, as I wouldn't want to give too much away, should you decide to see the movie for yourself.  So what is it about this Hollywood blockbuster that captured my imagination and heart, you ask?  Well, if I admit it, I've always wanted to be one of the heroes.  I grew up with a compassion for the losers, nerds, fat kids, underdogs - you name it.  In elementary school, I was was voted more than one year as "Student of the Class", namely for my popularity - not because I dressed the best or had money or was the coolest - but because I continually expressed care and extended friendship to all my fellow classmates.  Anyway, I'm not saying this to get brownie points or anything - but I think perhaps the fact that I have experienced hurt in my past has caused me to turn around and have a passion to help those who are hurting.  I hate to see people feel left out or alone.

That being said, I'm no super-hero.  I get grumpy and selfish with the best of them and when it comes down to it, I don't know if I am willing to pay the price of laying down my life for others!  So I'm left at a quandary.  Apart from being bit by a radioactive-spider or being selected by a mad-scientist to be magically transformed, I doubt I'll ever be able to attain the heights of wonder-woman on my own.

This is what captivated me about the movie, Captain America.  It was pointed out, more than once, that Stephen was weak and pathetic.  Yet it was his weakness that made him a candidate for super-human strength.  It was his scrawny little arms and his asthma-weakened body that prepared him to operate in the capacity of America's hero.

The Bible talks about a surprisingly similar principle when it comes to accomplishing great things for God.  1 Corinthians 1:27 tells us:

It seems that the best place for Christ's power to be displayed is through my weakness.  (See 2 Cor. 13:9)  When you have a chance to see the oppressed, weak and weary rise up to do something incredible, it brings much glory to God.  Then you have witnessed a miracle - the miracle of God's power at work, and His strength shining through human frailty.

Furthermore, those who lack great abilities; intelligence, strength, prowess and even popularity - possess a humility when given the opportunity to succeed.  This sort of person KNOWS that they have accomplished something beyond their means, having risen above their circumstances and they are unassuming enough to not take the credit.  The best sort of hero is a humble one, not allowing arrogance to defile their pursuits.

-but the people who know their God shall be strong, and carry out great exploits.  (Daniel 11:32)

Posted by happymummy at 3:54 PM