As I opened the door of the little community center following my friend's baby shower, I was bombarded by the tormented howls of my 3 year old boy, running towards me from the parking lot.  Thinking that he may have fallen and hurt himself on the way out to the car, I exclaimed "What happened, what's going on?" to the older children. 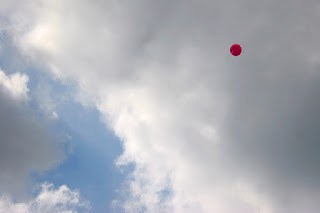 Little Ben, with tears rolling down his cheeks, blubbered tragically: "My ba-woon... it's gone!" and pointed to the sky at a rapidly disappearing green helium balloon on a yellow ribbon.  Relief filled my heart that there was no injury; no scrapes or bruises, yet I couldn't help but sympathize at the heart-felt innocence with which my son continued to mourn, his little finger pointing and his eyes wide with terror at the tiny speck that faded into the clouds, far above the city sky-line.

Instinctively, I knelt down, holding him close and tried to ease his suffering and sorrow.  I told him that the balloon was going on a journey, way high in the sky, and that it was having an adventure in the clouds.

"But it's gone!" he protested, as I tugged his little hand and moved him towards the waiting van.  The tears still poured down, and unreasonable, over-tired protesting manifested itself.

"Maybe someone can share their balloon with you!" I suggested, hoping to offset the tragedy and distract him.  "And we have lots of candy in the van from the pinata!" I bribed.

Thankfully, one of my older children took pity upon their younger brother and offered their balloon to him.  I commanded the children to hang tight to each of their strings as we loaded everyone up, bucked them and shut everyone (and every balloon) safely inside.

Driving down the freeway a short time later, the cutest words ever came out of my 3 year old's mouth:

"Mommy," he asked, "Can we go to the airport and get in a plane and find my ba-woon?"

Awwww!!! My heart melted at his ingenious, yet impossible plan.  Sadly, I had to explain that the "ba-woon" was too far away and we wouldn't be able to find it - not to mention the exorbitant cost of chartering a jet (or helicopter) and taking off on a futile mission such as this.

Oh to be young and have the most tragic occasion be the loss of a party balloon.  The pain is great and traumatic in nature, bursting forth with wailing and despair - but can be remedied by the simplest of gestures - a sharing sibling or a bright yellow lollipop.  If only it were so easy.

I don't have a heartwarming parable or creative quip to share along with the imagery of a balloon sailing beyond reach.  Frankly, I'm at a loss to bring closure to the vivid picture that is a comparable depiction of my own life at times - hope drifting far beyond grasp.   And I know that I'm not the only one who struggles with hope and despair; success and failure; good days and bad.  Sometimes life is beyond control.  Sometimes (sorry to burst your bubble) BAD THINGS HAPPEN.  And worst of all, there are times when we feel powerless to fix it.

I take heart in the only thing that is sure and true.  God's mercies are new every morning.  He is faithful.   He is the most secure, most real, most true part of my life. (Lam. 3:22)


For the mountains shall depart And the hills be removed, But My kindness shall not depart from you, Nor shall My covenant of peace be removed," Says the Lord, who has mercy on you.  "O you afflicted one, Tossed with tempest, and not comforted... In righteousness you shall be established; You shall be far from oppression, for you shall not fear; And from terror, for it shall not come near you. (Isaiah 54:10, 11& 14)

As someone who has lost a balloon or ten I can commiserate with Ben. As an adult I wish I could wail and run, arms waving across a parking lot..or room..or country. So thankful for mercies new every day. Empty hands allow for new and precious gifts...closed doors allow for unexpected alternate paths. Thanks for sharing Lisa! Hugs to all your precious ones. Say a special hi to my surrogate daughter. xo