A no-good-very-bad-horrible morning... and how I survived.

Splashing boiling oatmeal on myself at 11 AM this morning was a pivotal moment in my day.  As I frantically wiped the sticky goo off of my chest, I knew that something had to happen or I would be the one erupting and sending boiling blobs of angry words at my kids if they got too close.

If you rewind my day by a few hours, you can understand why I got up on the wrong side of the bed.  The reason, in fact, had much to do with the fact that my two little boys snuck into my room, well before our usual "wake-up" time, and began to climb on me - all knees and elbows - when I felt like I'd much rather hit the "snooze" button.  At first, I tried to cherish the moment - and enjoy their snuggles and stories, but the horror of my day became very obvious when the 3 year old began pushing the 5 year old away from his comfy spot next to Mommy, and the fighting and whining began. Clearly, they were both up too early and had not clocked enough hours of sleep to function without continual, incessant whining.

Onward to my day, I thought, as I opened a new package of coffee beans to grind them. "Drat!" I whispered out-loud to myself.  Going against my better instincts, I had bought that "new" brand of beans because of the attractive price tag on the grocery-store shelf.  They lacked the sheen and glimmer that I had grown used to with my gourmet coffee beans, and even the aroma told me that they were going to be a far cry from my usual brew.

Meanwhile, other children stirred, awoke and started to feed like hogs at a trough as they gobbled apples and homemade buns and begged for more and more food. 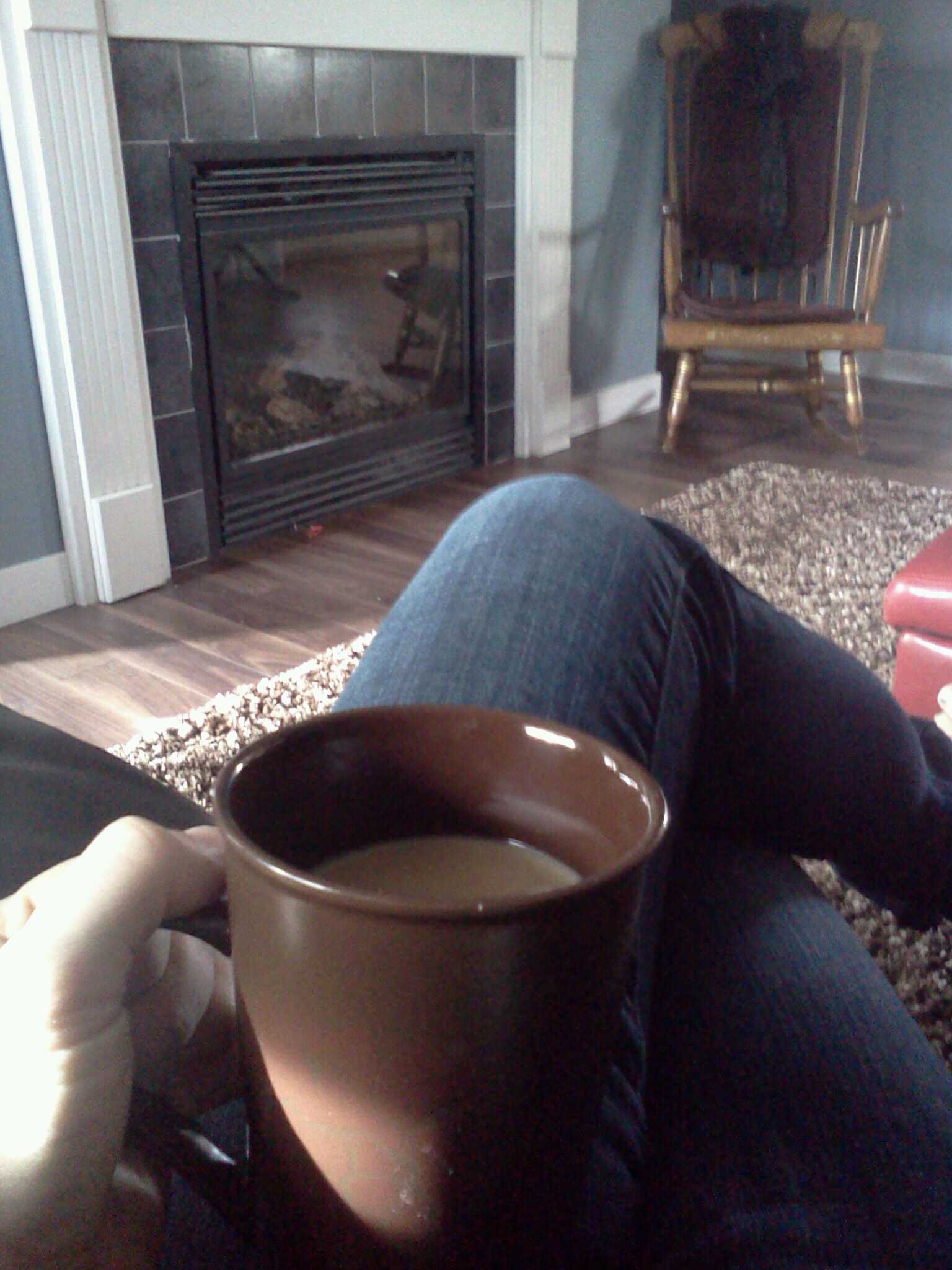 I attempted to start my day right.  With the less-than-lovely coffee in my favorite mug, I sank onto the couch and wrapped myself in a blanket and opened up my Bible.  Even my designated passage for the day seemed to lack encouragement and the zest and inspiration that a mother needs to face half-a-dozen children, a sink full of dishes and multitudes of "to do's" on the homeschooling agenda.  I was still stuck in the Old Testament, reading about kings and their nation who had turned from God and were sunk deep in the clutches of sin - worshiping idols, living lives of harlotry and murdering people until you couldn't walk down the street without tripping across a rotting corpse.  May the Lord bless the reading of His Word...  (Disclaimer: I LOVE the Word of God.  I just found it ironic that my passage for today was almost entirely about the wicked deeds of those who had turned away from serving the Lord.)

Once breakfast was over, I instructed the children to take care of their daily scheduled chores, namely to clean up the disaster state that the kitchen was in, including that mess of their first feeding of the day.  I went into my room, intending to tackle some of the more neglected areas - my enormous bathroom mirror, counter top... the toilet!  I also stripped the cookie and banana soiled sheets off my bed (thanks to my youngest child) and I even vacuumed my floor!  Hooray! Progress!

Not so fast... of course the children needed step-by-step instruction and prodding to complete their own cleaning jobs!  I came into the kitchen to find it still looking like a complete disaster!  I barked out some orders and began to wipe down the kitchen counter and toss dirty dishes in the sink.  Then I remembered that I had been so busy, I hadn't yet eaten any breakfast.  I measured oatmeal and water into a small pot, turned on the stove and returned to my room to quickly finish my tidying.  Only... what did I find?  There was Ezra, a trail of crumbs leading to him all the way from the doorway to the place where he sat, crumbs spilling all over the mattress and even sprinkled in the basket of laundry that was sitting on the bed next to him!

"Ezzzrrraa!" I shrieked.  "No food in Mommy's room!"  I sent him to the kitchen to eat, and I turned the vacuum back on and proceeded to clean up the mess on my bed and previously clean carpet.

Then I went back to the kitchen, where I immediately smelled burning oatmeal!  "Ahhhh!! My oatmeal!" I grabbed the pot, splashing the molten goo upon myself (Remember?) while I poured what wasn't burnt into another pot, and dropped the scummy, burnt-on-oatmeal pot into the sink to soak.

It was just 11 am, but I felt like I had experienced entire week's worth of whining, fighting, mess-making and misbehaving.

Somehow I slogged my way through a minimal amount of schoolwork for the day and made the kids some lunch.  I fired off a prayer to God, asking for patience, but I continued to feel horribly overwhelmed and ill-equipped to handle my kids.

With nap time on the horizon, I relinquished control and told the kids to either play downstairs or in their rooms, and I plopped my 3 year old on my bed in front of his favorite cartoon so I could hopefully procure just a few moments of peace.  I locked my door and shut myself into the bathroom.

I wish I could tell you that I had some sort of epiphany that suddenly changed my perspective and made sense of my day.

I felt like laying on the floor, covering my head with a towel and crying or swearing or maybe I would just close my eyes and try not to think anymore as everything within me wanted to give up.

Instead, I took a look in the mirror and realized that I should take a shower.  A long, steamy, potentially relaxing shower - ALONE.  So I did.  And miraculously, no-one was whining at me, and there were no messes being made inside that lovely-lonely shower stall.

Finally, I was feeling a little bit less stressed, and definitely a lot cleaner.  I shut off the water, and took my time - didn't rush out of the room to take care of the kids because, from what I could hear, they were just playing and no one was in a state of emergency.  I took the time to put on some yummy smelling lotion.  I trimmed my nails and brushed my hair.

I spent time taking care of ME, and I began to feel a little bit better about life.

I'm not sharing this to belittle my children and my life as a VERY BUSY stay-at-home mom.  I'm also not trying to minimize the importance of my faith, and seeking the kind of peace that only God can give.  However, once in a while, you have to ask if you are treating yourself with care and kindness.

Once in a while, a mom (or dad) needs a time-out.  Doing something as simple as showering, using lotion and ignoring my kids for all of 23 minutes didn't change my life or magically turn my children into little angels.  But, for a few moments I could breath, and because of that, I walked out a better (slightly less stressed-out) mom.  I was ready to take on a little more of what this day was dishing out... at least until nap-time.

Posted by happymummy at 3:47 PM