I love a challenge. I love to test my limits and try new things. That's why my husband and I have made a hobby of cooking - so we can try the strangest, most obscure foods. That's why we traveled to Thailand with 3 children (and came back 8 months later with 4 children, having given birth to a little girl while living there!). That's why I'm entering a half-marathon this summer. My thrill with doing hard things, is probably what gave me the guts to have a large family - while it's "easy" enough to "produce" 6 children, I know it's a whole other issue to raise them!

We have such a short time to live on this earth and make an impact. I learned quite a few years ago that I did things differently, and at first this bothered me. I often felt that I did not fit in with my peers. Then God spoke to my heart and reassured me about following the path that HE had planned for me, and not trying to do things based on everyone around me. He gave me a motto for life:

That's something that has stuck with me. Whenever I wonder why I have to go through the trials I do (often self-inflicted because of a decision we made to do something hard), I remember that I'm not like everyone else, and I have to live according to my specific path. I'm not saying to go out and do something stupid for the sake of creativity, or to be different - but if something challenges you, and you think: "Could I do that?" then maybe it is something to tackle. Don't be afraid of the unexpected! Don't be afraid that you might fail or appear weak... or the worst fate of all - that people will think you are WEIRD. Believe me, it's not as bad as you might think! 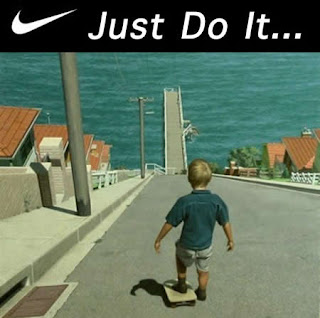 While a sense of adventure is a fantastic trait, you don't have to trek to the other side of the planet to do hard things. You don't even have to become a teacher among the troubled inner-city youth to do hard things. Do you know what's hard? Laying down your life on a daily basis - it's not just the once in a while challenges that are hard to do, but giving of yourself to your family and those closest to you, who know you best.

Above all, love each other deeply, because love covers over a multitude of sins. Offer hospitality to one another without grumbling. Each one should use whatever gift he has received to serve others, faithfully administering God's grace in its various forms. If anyone speaks, he should do it as one speaking the very words of God. If anyone serves, he should do it with the strength God provides, so that in all things God may be praised through Jesus Christ. To him be the glory and the power for ever and ever. Amen.
1 Pet 4: 8-11 NIV

However, that doesn't get you off the hook to step up to some other challenges in life. Think about it... what's in your heart to do? Get started, make a plan, don't just dream - act on it.

Posted by happymummy at 9:22 AM

This is great stuff Lisa, something I need to put in to pratice in my life.These are
so good, keep them coming.