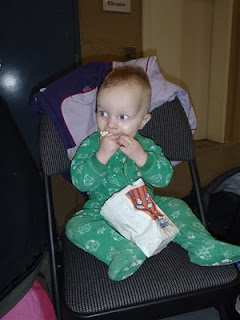 I made a huge mistake... let me tell you about it.

My husband and I decided to squeeze in a "late-night" workout at the gym, right after the kids were tucked in bed (and monitored by their Aunt and Uncle). The problem though, is that I had been extremely busy in the hours prior to this - running kids to piano lessons, then going to their special AWANA car race event. I had eaten a small sandwich around 4:30, then had snacked on some super-salty, definitely not good for you, popcorn and a couple of juice boxes during the kids' race. As a side note, in lieu of having our 14 month old operate as a vacuum and eat up the popcorn that was all over the floor at the event, I gave the little guy a small bag with some popcorn. Let's just say it was like crack! I don't think he'd ever had anything so salty and artificially enhanced in his life (and I'll do my best to prevent it from occurring again in the near future!)

Anyway, I had consumed little more than a chemically enhanced, hydrogenated oil product, salt and a handful of corn kernels, along with a couple little juice boxes and we were off to the gym.

I began my workout with gusto, ready for some serious training for my upcoming 10K race that was fast approaching. Something was wrong though... about 10 minutes into running, I was feeling strangely weak and nauseated. My legs felt like they had lead weights strapped to them, and I just couldn't seem to keep up my normal comfortable speed. I felt really unhappy and unmotivated. I wondered why I was struggling so much when it hit me - I was hungry! The sandwich I had consumed in the afternoon had long since been depleted of energy, and the popcorn and juice - well that was a complete mistake! I dragged my feet halfheartedly through my workout, and cut down on my time and distance. Once we were home, I ate like a ravenous wolf, having learned my lesson!

I began to consider how "running-on-empty" has such an effect on our overall performance and state of emotion. While this may be obvious when it comes to our physical being, it applies as well to the state of our soul and spiritual well-being. When you are re-fueling on a constant basis with prayer, scripture, and active meditation of God's truth, it makes sense that you would be in a healthy state spiritually; ready to face a challenge, not easily distracted or worn down by life's cares. When you do not prioritize your spiritual needs, your mood is prone to swinging up and down, you are more likely to resist challenge and growth, and the idea of putting out effort to help others is probably exhausting.

So you say that you regularly attend church, and that sees to your spiritual needs? Unfortunately, I think this is a mistake many believers make. I think Christians can treat church a lot like a cinema. They come in with the crowd, ready to see the "Feature Presentation". They may even splurge on something extra to munch on (that is often of little nutritional value). It's fast, easy and accessible, and that is the way we like it! Do you see a connection at all with church? I believe it is possible that we can learn from the sermon, and once in a while be granted a life-changing revelation during a Sunday service. However, just like most movies you can watch, the contents of Sunday are probably not going to stick with you beyond a few hours or maybe a few days. At least, that's how it ends up without any further effort on your part.

If you were any sort of athlete, and could only fuel up once a week... what kind of medals would you win? Oh wait, you'd be dead! Sure, it's not exactly like physical food - the nourishment we need from God is deeper, and carries us farther and in different ways. However, it is imperative that if you want to grow and change; if you are seriously seeking to live the Christian life and want to experience the adventure that God has in store for you - then you MUST look at both your "diet" and your spiritual appetite!

I understand that some people just lack the resolve or desire to earnestly seek God and make prayer and Bible study a priority. In that case, I would challenge you to look at your life and see what is plugging you up - to put it bluntly. Are you filling up on "junk" that takes the place of God in your life? I heard someone explaining the reason for fasting and it make a lot of sense to me. If you really crave something and have a hard time putting it down or letting go of it, then it has power over you. This could be video games, music, sweets, junk food, Facebook, anything... By fasting these things, you re-enforce that the most important thing in your life is your relationship with Jesus. You shouldn't crave anything more than Him, and nothing should have that power over you, to control you.

It's not enough to rely on others to feed you spiritually. It's not enough to coast along on last month's prayer time or Bible reading. If you really want to race well, you have to eat well! Remember what Paul said in 1 Corinthians 9:24 Do you not know that those who run in a race all run, but one receives the prize? Run in such a way that you may obtain it. And Hebrews 12:1 also talks about us running the race with endurance. This doesn't come from a "dine-and-dash" Christianity where we "do our time" in the pew on Sunday, and hope it carries us through the week.

One of the ways that has really changed the way I receive from Sunday services, is the fact that I meet with other people and discuss the sermon on a weekly basis. Suddenly, by reviewing the scriptures, and putting my own efforts and thoughts into the theme of the sermon, I am able to retain so much more!

Apart from that, I know that I can fill myself up spiritually in many different ways. There are countless books and online resources available to us, unlike any generation before! We have so many ways to "fill up on God", and yet we often don't. However, back to the popcorn - I think that only listening to what other people have dug out of God's Word, is a lot like only eating popcorn. It is really easy, and will carry you for a short time, but it doesn't exactly "stick to your ribs". When you dig into the Word for yourself, processing the scriptures bit by bit and allowing it to settle in your heart, there is something more lasting and "meaty" taking place. I'm not writing off the value of people who can teach and minister to you. We can learn so much... but really, what I'm trying to say is that you can always take it a step further. Don't just sit in front of the TV watching "Best Body Boot Camp Workout". You have to actually get up, and go through the motions yourself if you want the benefits. The same goes with the principles in God's Word. But be doers of the word, and not hearers only, deceiving yourselves. (James 1:22)

So, from now on, when I'm planning to work out, I'll be paying attention to what I've eaten. And since I want to move forward in the purposes and plans of God for my life, I plan to pay attention to my spiritual diet as well.
Posted by happymummy at 2:12 PM

Really good stuff lisa,now I have to put it in to pratice,not so easy
to allwes do, but I guess its comes to how bad do we really want
change in our life.