If you've missed part one, you might want to read it and get a sense of what's going on in my life!

Wow... de-cluttering can be an emotional event.

I have seen a few clips of the emotionally jarring reality-TV show, Hoarders (and I don't really recommend it), but it has the benefit of opening your eyes to the danger of holding onto stuff.  These people obviously have mental issues that have led to their horribly unhealthy state, but in all honesty, I see a glimpse of myself in their unwillingness to part with objects - particularity ones that are attached to sentiment and emotion-filled memories.

As I work my way through the kids' rooms, I have encountered a variety of emotions.

First, the obvious, there is a gleeful elation as I rid myself of what I feel is junk.  It's a good feeling to think that so much stuff will no longer be on my children's floors and under their beds and it will either be used by a child who will hopefully appreciate it, or, if applicable go to the landfill.  I had to stop myself from saying:  "But Grandma gave them that toy, so I can't get rid of it!" and instead, I would logically assess whether it was a toy we needed in our lives.
Next there has been growling, furious frustration as I sort through the mess created not by myself, but by the ones whom I birthed into existence.  (Is this what God feels like when He looks down on humanity?)  Yet, I will not give up on my precious little people, and I am their mother so if I don't help them, who will?  The process goes something like this:  Barbie shoe, wooden block, hair thingy, apple core, pencil, dirty sock, ripped up paper, princess crown, and on and on I sort... 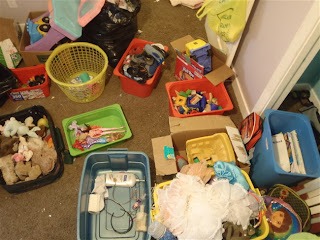 I found it extremely useful to have various boxes and bins surrounding me as I sorted through toys.  Although I have determined that nearly every toy is going to be confined to the garage for now, I still want to organize them for when/if I do decide to bring them back into the house.  I plan to keep a bin of dress up clothes, wooden blocks, and toy cars with a play mat for them.  Beyond that, I'm not completely sure what is worthy of being called a useful, creative toy.


It's amazing how much stuff we can easily acquire for ourselves these days.  We live in a generation where you can purchase pretty much anything you want for a low price.  With Dollar Stores and WalMart, you can buy all sorts of cheap toys and random household items.  Yet, although they are cheap in dollars, what they cost us in the way they clutter our lives is a hefty price.

I often refer back to the "Little House" series of books by Laura Ingalls Wilder.  They were favorites for me as a child, and I have enjoyed reading them to my children as well.  Life in the late 19th century was difficult in many ways, and they didn't benefit from all the technological advancements that we enjoy today.  However, it was also beautifully simple.   They took care of their children and homes, grew most of their own food and didn't fill their homes with extras like we insist upon today.  Laura started out with a corn-cob doll named Susan (which was essentially a corn husk wrapped in a scrap of cloth)  before she was given her own special rag doll one Christmas.  That was the extent of her toys as a young child.  She and her sister, Mary, would play happily in the attic among the hanging herbs and squash and root vegetables, playing house and pretending to have tea parties.  So simple... and it seems that none of the essential things needed to grow up healthy and intelligent were lacking in any way!

As I continued to de-clutter in my childrens' rooms, there were moments of bittersweet reminiscing about the past.  I relented and allowed myself to save little treasures - like one of Sabrina's first baby toys and a cute, colorful knit baby hat.  I have a box I keep of baby clothes that I can't bear to part with - whether they will be worn by my grandchildren or not, I'm okay with keeping a small "memory" box.  So I decided that a few mementos of times past could also be placed along with the precious newborn sleepers and hats and baby booties.

Thankfully, my children were enjoying an afternoon of activities at the YMCA today, so I hurriedly completed my sorting so I could donate items and box everything up before they returned home.  You wouldn't believe how much work it is, but I'm nearly done.  I can't wait to vacuum the rooms once naptime is over.

Special thanks goes to my sister-in-law who kept my mischievous baby out of the way while I worked.  She also lovingly brought me a latte to keep me going so I could complete the process!

I endured the same feelings as I de-cluttered before moving. In the end it is totally freeing.
My oldest has told me recently that she thinks it is time to go give more toys away. They haven't really accumulated much more. I will totally take advantage of this in her and desire in her and purge ourselves again soon. Thanks for sharing.