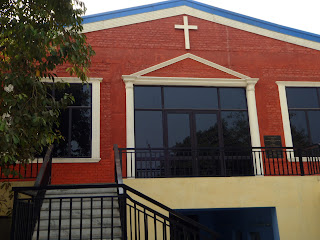 Time was going by so quickly - and we hardly had time to think about home and our kids because we were so busy, seeing and experiencing so many new things.  It really felt like we were on a different planet - or as if we were living in a documentary.  Everything was just so different from our usual lives, and there was always something that would surprise us or overwhelm us or capture our emotions...  That's why it was nice that it was Sunday.  It was a day of rest, a day that would be more familiar, spending time in God's house with people whom we might not know very well, but who would welcome us as part of God's family.

Yet it would not all be familiar and normal this Sunday morning... for starters, the first morning service would be in Hindi!

I don't think I mentioned before, but one of the neat things about where were were staying was that the Pastor's home and the church and Bible school were all on one property, surrounded by a large brick wall.  Along with the Bible college students, a couple other families lived on the property, all committed to the cause of the ministry.  Again, as I've mentioned, there was such an enormous difference in atmosphere once you entered the gates of the complex - the mess was gone, the hurry and chaos was gone and there was a peace and beauty that filled the air.  So it was really nice to be able to simply walk over to the church building rather than battle the insane traffic just before the morning service started.

We walked into the sanctuary, and seated on 3 long rugs, in rows of 2, were all of the girls from the orphanage.  Every Sunday morning, they transported the girls here to take part in the worship service.  We waved and smiled at them, and a few of them shyly smiled back.  Being the guests of honor (which still felt rather strange to me), we were seated front and center.  The building began to fill up with beautiful brown people (I don't mean that rudely, at all!) and the worship team took their place on stage.  Right away, there was such a rich, vibrant, joyous tone to the music!  It was impossible not to clap and attempt to sing along - even thought the words were in Hindi. But occasionally, they used "hallelujah" in their songs, which made it a little easier for us white folks!

As a church, they obviously had a close knit community.  They asked who was having a  birthday or anniversary that week, and prayed for those individuals.  They spent time praying for their nation and it's political leaders and prayed with great zeal and gusto.  As planned, Steve and I came up during the offering and performed a song - one that had been written by someone in our church.  The people seemed to enjoy the different flavor of music. Then it came time for us to be welcomed and introduced, and they called the four of us up onto the stage.  Once again, we were honored with each of us being given a beautiful bouquet of roses.  The Pastor introduced us as "a wonderful team from Canada" and then all but Dan exited the stage and the tag-team preaching/translation began.

It only further enhanced the feeling of being in another world to spend so much time listening to a language that we didn't understand, but somehow, we didn't feel entirely out of place in that Hindi service.  After a short break, the English service began, and we enjoyed the opportunity to share in the lives of Christian brothers and sisters from the other side of the world!

We were given the opportunity to pray for people afterwords, and as they came with open hearts, asking God for strength and hope in response to Dan's message, we felt our hearts melting at the obvious struggles that these believers faced.  It wasn't difficult to commiserate with them, and to share in their suffering as we asked for God's grace upon their lives.  But most of all, it was an honor to join with them in faith, as we believed for God to move in their lives and, by association, India as well.

One thing I noticed was an abundance of warmth and openness among the people we met.  It seems that hospitality is a way of life for Indians, and we were greeted with smiling faces all throughout the church.  One older woman came up to me after the service and grabbed onto my hand, saying "I just had to meet the mother of 6 children!"  She had a huge grin on her face and told me how that (lots of kids) is the way it used to be... and that she came from a large family.  I just smiled, not knowing exactly what to say, but enjoying her enthusiasm.

Before we knew it, our work was done and yet another milestone had been crossed off the list of ministry work to do on this trip.  Somehow, we Canadians, for all of our country's typical apathy and lethargy, were able to be a blessing to this congregation in India.  One of the most poignant moments of this Sunday however, had occurred in the peaceful, heavy atmosphere of prayer that took place before the first morning service.  It was difficult to not feel a sense of uselessness here in India - that our problems back in Canada were paltry and lame and merely symptoms of extreme self-centeredness.

Then I felt the Holy Spirit speak to my heart.  First, I felt Him telling me that I was born in North America on PURPOSE.  It was God's plan, His will, and His design for me to born in a more affluent nation.  In that plan, he has a purpose and destiny for me to operate within my surroundings.  Here is something that rang clear and true in my heart, and I wrote it down in that morning prayer meeting:


We can come to a desolate place, like the slums, and feel such a need to impart destiny and vision in to the lives of these people.  While that is necessary and true, I would say that the great deception is in the fact that our churches in North America are filled with people lacking true destiny and purpose.  We have been deceived into believing that our destiny is to have a 9-to-5 job, a nice home and family, and to attend a comfortable, affirming church.

What a dismal, uninspired destiny... God has so much more for us!

Posted by happymummy at 9:33 PM

I love this,it is so true, may god change our hearts and lead us in his ways!!