It was mid-afternoon and having just completed the sewing school graduation, we were all feeling quite worn out.  The hurry and intensity of the last few days in a strange culture were catching up to us.  Since we had checked into our hotel in the morning, we were dropped off at the door and trudged our way up the stairway, confirmed the time that we would have to meet again before leaving, and locked ourselves into our separate hotel rooms.

For the price we paid, it seemed that this was supposed to be a "nicer" hotel, yet the white bedspread was stained and the bathroom was not very clean.  It made us realize what a luxury it was to be staying in the home of the pastors, back in Delhi - there was nothing very homey or comfortable about this tile-floored stark white room.  The one bonus was that we had a balcony that looked out onto the hotel's lawn, but even that had a downside since each hotel room's balcony was connected and I immediately wondered about people looking in our room or knocking at our exterior door in the middle of the night.  So much for feeling safe and secure.

Our room had a television, and feeling the need for some down time, we flipped through the channels... In typical Asian fashion, there appeared to be a lot of day-time "soap operas" and despite their bizarre plot lines (as best as we could understand with the language barrier) I soon drifted off to sleep.  After a brief nap, I awoke to the sound of Dan groaning as he lay on the bed next to me, and he didn't look so good!

"What's wrong?"  I asked with concern.

"I don't feel very good" he said, with one hand on his stomach and an arm thrown across his face to block out the light.

I realized at that point that I also had a strange percolating, gurgling sensation in my stomach.  It felt all acidly inside - but not too much... just a slightly uncomfortable feeling.  So far, we had remained quite healthy during our trip.  The infamous "Delhi belly" had yet to assault our bowels and the food had caused no problems for us.  It was nearly time for us to get dressed and ready for the special church service, so we decided to knock on Steve and Kindra's door and see how they were faring.

Apparently, Dan was not the only one feeling a little bit "off".  Kindra's skin was more pale than usual, and she confirmed that she also was feeling a bit of "indigestion".  We talked for a few moments, going over what we had eaten that day and we soon narrowed it down to the fresh bits of onion and cucumber that were served alongside our delicious Tikka Chicken earlier that day.  So much for the adventure of dining on our own!  No wonder the pastor had been sheltering us so much during our stay - we rarely got the chance to eat out, and it was never ever at a roadside stall.  Far too many times, we would be driving down the road and some delicious scent would assault my nostrils... somosas or curry or something that I had never experienced before.  But we were sternly admonished to stay away from these places, at risk of serious illness!  Now, the very restaurant that we had been sent to for lunch may be the culprit for our stomach troubles.

If there is anything that I learned back in the days of my much tamer youth "mission trips", it is that when it comes to ministry, you must persevere.  There is no sense in letting the short time go to waste, no matter how badly you are feeling.  So there was no question in our minds about the schedule that evening - no changes would be made - we would go "on with the show" as they say.

We all got dressed and headed downstairs to the lobby to search for our driver who was supposed to be meeting us.  He walked up to us on the hotel's driveway and motioned for us to follow him across the street where he was parked.  Stepping outside the hotel's gates, I was once again reminded of the intensity of this culture - people absolutely everywhere, garbage on the ground and the dust and dirt clinging to every tree, brick, and the sidewalk.  Then there was the unusual combination of cars, rickshaws, motorcycles, bicycles, horse-and-cart, the occasional camel and the ever-present stray cows and water buffalo that shared this street.  Just before I was going to walk across, I jumped back, startled and realized that I had to look the opposite way for oncoming traffic!  Not only that, but we were in a society where the rule "pedestrians have the right-of-way" was non-existent!  Instead, it was our responsibility to find a gap in the traffic and weave our way through the chaotic traffic. Fortunately, this was a less busy street than many we had seen, and we managed to cross over to the vehicle safely!  What an adventure...and this was just us trying to get into our taxi! 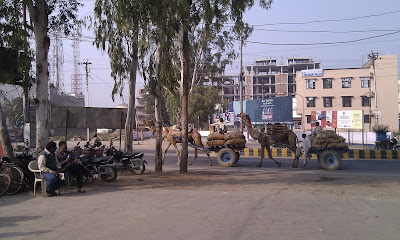 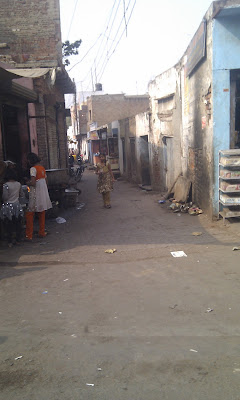 We drove down some narrow side streets and were approaching what appeared to be dead end in the road, with a high wall at the end of our path in a fairly isolated area.  To be perfectly honest, at this time I started to become quite nervous and wondered just where this driver was taking us!  For all we knew, we could be taken to a deserted area to be robbed - everything felt so unfamiliar and we weren't being accompanied by anyone from the church so we couldn't even communicate with our driver!  I silently prayed for safety as the vehicle lurched around potholes and slowed as it neared the wall and vacant lot.  Suddenly, the driver took a left turn, and then sped his way through a narrow underpass which I could now see was a shortcut under the highway.  With a sigh of relief, I turned to my fellow Canadian passengers and admitted quietly: "I was getting a little concerned for a moment..."

One of them nodded and said that they had experienced similar thoughts, but now we were in an obviously populated area once again and we didn't seem to be lost... so we had to assume that we would see the church soon!  I think this is where I realized how much of an effect the lack of sleep and the stress of so many new situations was wearing on me!  We were in such a foreign environment and experiencing so many new things that it was difficult to relax and trust that everything would work out smoothly.  I think also, it was the lack of control over the situation - it felt as though anything unexpected could happen, and we had so little understanding of the culture around us so any problem that arose would be difficult to handle.  I suppose that these feelings are all part of the complete experience of a mission trip - prayer and trust in God is of necessity!

It wasn't much longer before the vehicle slowed down and the driver honked the horn at the gate of a building.  Smiling, friendly people opened the gate and came out to greet us, and at once we knew that all was well!  We hopped out of the vehicle and said "goodbye" to our driver, whom we would see the next day for our sightseeing excursion.  Once again, it was such a comfort to leave the chaotic, unfamiliar and dirty world that surrounded us and enter into another safe and peaceful haven.  There was such an obvious difference as soon as you were within the church complex - it was quiet, calm and comforting.

That evening we had the privilege of joining in a special church service that was planned specifically for our visit.  Steve and I played some of our music from our home church, The Gate, and Dan (my hubby) preached a message of encouragement, with the aide of a translator.  Afterwards, the people were invited up for prayer, and it was up to our team to help minister to them!  We prayed for sick people, people with struggling businesses and even for a woman who was of the Hindu religion, who had just come to "check us out" and see what the church offered.  We also prayed for a young man who was wanting to be married and was waiting for his parents to pick the right bride.  It really was a privilege to join our faith together with these people, who opened their hearts to us in trust.  Not only that, but you could tell just how important they deemed the power of prayer - they stood expectantly and you could really sense the presence of God as we prayed.

After the service we were treated to another amazing home cooked dinner, this time made by Pastor John's wife.  We were seated around the table, along with Pastor J and several dishes with enormous mounds of food were placed in front of us.  I felt my stomach clench a little at the idea of more curry, but unlike my companions, I didn't feel sick -just not very hungry, so despite my lack of an appetite, I filled my plate with slightly smaller than normal portions.  Kindra, on the other hand, was obviously feeling quite ill yet was trying to hide it from our generous hosts.  She politely spooned a tiny amount of each dish onto her plate and I watched as she nibbled reluctantly on her child-sized servings.  At one point Pastor John looked at her and said "You need to eat more food!" and Kindra apologetically explained that she was harboring an upset stomach.

Despite the hospitable nature of our new friends, I found myself yawning through the conversation that cheerfully filled the room.  It had been an exceptionally long day... from waking early to catch a train in Delhi, to our visit to the Dalit school, and the evening at the church; it felt as though we had filled the day with enough activity and new experiences for several weeks!  Fortunately, our hosts were understanding and before too long, we were driven back to our hotel so we could get some sleep.

Of course, to be expected, we encountered another blaring expression of Indian culture when we arrived at our hotel.  Loud music blared as we approached the hotel's lobby... apparently there was a wedding in the banquet hall that evening and we would be treated to the obnoxiously loud rhythms of Hindi wedding music as we attempted to fall asleep!  Thankfully, the music wasn't too loud once we were locked in our bedroom.  And at least it provided continuous melodic background noise that we could attempt to tune out once we collapsed onto our bed.

I climbed between the crisp, cool sheets and tried in vain to smush down my overly large pillow.  My mind was reeling with all the experiences of this day, and the previous few days.  It seemed like we had been away from Canada for a month, and after our jam-packed schedule, not only was my body tired, but I was nearing emotional exhaustion.  As I was thinking of all the beautiful children and the generous sewing school girls whom I'd been so touched by, I dozed off to sleep despite the party that was carrying on in the hotel.  It was time to rest my body and my mind in preparation for just a few more days of adventure.

Posted by happymummy at 7:12 PM