We awoke at the crack of dawn, which was hardly any effort considering the jet-lag, and we prepared for our newest adventure.  It was time to travel, India style!

With a stuffed backpack, I was dropped off with my fellow teammates at the local train station in New Delhi, to head to Agra for one night.  If we thought we had seen chaos before, we were in for a shock.  The train station was crawling with people.  If you ever needed a travel wallet (the kind that goes under your clothes) the time was now!  People were bumping into us, pushing their way to get in and out of the station.  There were old people, young people and entire families with luggage and you could tell that there was people from lower castes and higher castes, all just wanting to go somewhere.

Thankfully, we weren't just dropped off at the door, but we were guided to the proper train platform and the two young men from the church stayed with us to wait for our train to arrive.  I held my backpack close in front of me, not willing to have it on my back when it contained so many precious items.  This place was beyond crowded!  There was a family with huge sacks of their belongings, children laying down on cardboard and covered with a blanket, trying to catch some sleep before loading up on the human cattle-car, also known as "economy class".  Thankfully we weren't booked to travel in the "standing-room-only", sardine-packed train car, accented with essence of curry and body odor, but instead we were traveling in style, in second-class seating.  That meant we had our own assigned seats that had fold-down trays and a little bit of extra luggage space. 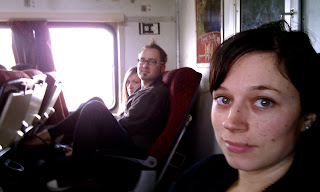 Our train arrived, and we found our seats and settled; keeping a close eye on our belongings as other people crammed in, searching for their places.  Right away, it was difficult for me to keep from wrinkling my nose at the obvious grime and dinginess of this train-car.  It's not like I'm a germ-freak by any means, but everything seemed to be coated in a greasy, dusty sheen, and I had difficulty looking through the window because of the smears of fingerprints, and imagined (or unimagined) mucous and other foreign matter.  I gingerly took the curtain (which felt stiff and grimy as well, like a muddied sock that has been allowed to dry on the laundry-room floor... for a month...) and I attempted to wipe clear the window to get a better view.  All in all, it added to the effect of my vision of India - a smoggy film between my eyes and the landscape, corrupting each of the pictures and videos that I took! 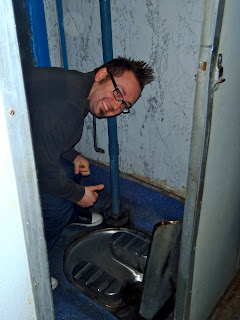 The "boys" became adventurous as we waited, and thought they would check out the infamous "bathrooms" on the train.  We'd been told by a friend who had traveled to India, that the toilets on trains were for emergencies only.  Like... you're about to explode and mess your pants, sort of emergency.  They returned to Kindra and myself with eyes as large as saucers, and said "Girls, you do NOT want to go in there!"

They proceeded to describe to us the stainless steel "toilet", actually, more of a hole in the floor and a pipe that curved out and onto the tracks.  As cool as it would be to squat over a metal hole and pee onto the tracks while on a moving train, I decided then and there that I would "hold it" until we reached our destination.  Kindra questioned whether there was a sink or any means of cleaning oneself after using this "toilet" and we were told that there was simply a small water spigot with a metal cup with which to swish away the refuse... and any remaining germs... ahem... ya.  When in India....

With the grand tour of the train out of the way, we settled in our seats and began to move.  I worried that I would become motion sick, but surprisingly enough it was a fairly smooth ride.  I sat, semi-hunched forward, still feeling uneasy about the grime on my seat and not wanting to coat my hair with the germs of the thousands who had previously rode where I now sat, and I looked with interest out of the window.  Sadly, what I saw was once again a prime example of India's poverty.  With dismay I noticed many children playing along the tracks, unattended and dirty, seemingly looking for food or valuable scraps that might provide the means to a bite to eat for the day.  Others had obviously made their homes along this busy place, and I wondered how one could ever grow used to the constant clatter and noise of the trains passing by.  Not only that, but it boggled my mind how mothers (or older siblings) could possibly keep little ones safe in this environment. 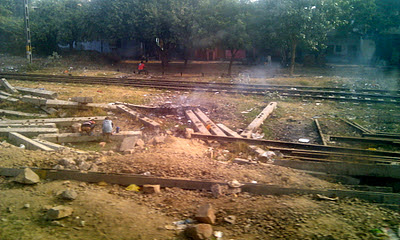 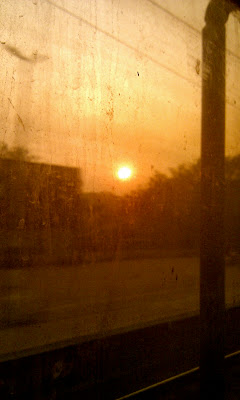 For a while, I busied myself taking photos and video clips of the dismaying sight of people's everyday living on the side of the tracks.  From large apartments and shops to cardboard shacks, from the middle-class to the very poor, each and every person dealt with the same dirt and smog.  There were people everywhere - some hurrying along, some just squatting in the middle of a vacant, garbage filled lot, as if they were aimlessly waiting for something...

After some time, we left the suffocating collection of buildings, and the swarms of people and we were in farmland and open fields.  After several days of being stuck in a city of 20 million, myself feeling somewhat claustrophobic and missing my "alone-time", we finally could see the green fields and blueish-grayish sky again!  I felt like I could breathe deeply once again, but alas I was trapped on a train with stale air smelling of B.O. and curry so I didn't take that deep breath that the open sky invited.

Meanwhile... we were on a train - not just any train, but an Indian train!  One of the most interesting things about traveling this way, was the constant stream of sales-people walking up and down the narrow aisle.  I would hear the creak of the door to our train car behind me, and then the smell of curry would waft towards me.  Next I'd hear some undecipherable words, as a man carried a large tray with small foil wrapped dishes of curry.  There was also people selling chips and other packaged Indian treats and someone selling somosas.  There was a young man who carried a large metal bucket crammed full with bottles of pop and water (that looked quite heavy!) and a man with a canister of coffee.  Our favorite though, was the Chai-walla (tea seller) one of which had the funniest way of saying "Chai" in a low, guttural tone as he walked through our car.  (We managed to catch a little bit of his giggle-inducing-voice on video!) 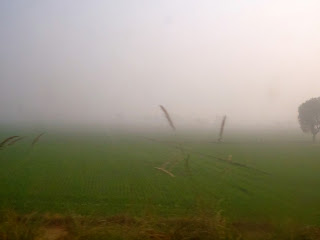 Eventually, despite the nefarious odors and the grime on the back of my seat, I relaxed and closed my eyes, taking a short nap in preparation for the busy day ahead of us.  When I awoke, we were heading back into a urban area - this one looking slightly different than the city of Delhi.  Agra, for one thing was a smaller city, with a population of just 3.5 million.  One of the things that makes Agra unique, however, is the prohibition of factories and industrial activities which produce pollution, in effort to keep the air clear to protect the Taj Mahal from damage.  (We even learned on our tour the following day that there are pollution sensors at the Taj Mahal, and if the smog reaches a certain level, all roads will be shut down and automobiles will be forced to park until the air sufficiently clears!)

Agra appeared to have a lot more rural influence, and there was a lot less cars and a lot more rickshaws, bicycles, horses and carts and other animals present.  The train slowed and we soon pulled into our station.  We scrambled to collect our belongings, and hopped out to an even greater crowd of people than we had left in Delhi!  Trying to put on an air of confidence, I walked forward and scanned the crowd of people for someone who looked friendly... or Christian... or at least who looked like they were looking for us!  It was quite a nerve-wracking feeling that we were in the middle of a different country and culture, on the other side of the world, with no one familiar to greet and guide us!  Then I saw a two modestly dressed men, one whom was standing and holding a sign that said: 'Mrs. Lisa'.  Okay, that must be us, I concluded, and I moved forward and said "Hello".  He turned and began to thread his way through the mass of people, and we scurried along to follow him.

He led us to an SUV, and we threw our luggage in the back and climbed inside.  We asked if he was Pastor J (the man whom we were expecting to meet us) but we didn't really get much of a reply.  At this point, we were a little confused, not knowing if this guy was from the church or if he was merely our driver... or if this was a set-up to drive us to the outskirts of the city, beat us up and rob us.  Steve tried once again to question him, asking intently: "Pastor J?  Are you Pastor J?'  But the the driver didn't appear to understand us, and the man in the passenger seat was busy talking on his cell phone.

Some of us were feeling quite anxious now, and it seemed that we could only sit back and wait for the inevitable to happen.  Either we were in the right place, with the right people... or...

Thankfully, it was a short drive and we slowed and turned into the "Hotel Grand" which was not at all grand, but was the hotel mentioned on our itinerary!  We were safe...

With a sigh of relief, we jumped out of the vehicle and were greeted by a smiling, kind-looking man: Pastor J!  In the comforting presence of a trustworthy guide, we checked into our hotel rooms and began to get acquainted, ready for a day of adventures and ministry in the city of Agra!