Eat Your Veggies, It's For Your Own Good!

It's a familiar sight.  There's almost always one child at my table who didn't like the evening's dinner selection and is agonizingly working at their little pile of veggies or potatoes... or whatever it is that they don't like!

Some of the older kids have become better at putting up with food they don't favor; learning to plug their nose, take a large bite and gulp it down with a swallow of milk.  Thankfully, my children are not very picky eaters.  We've always had a very eclectic dinner table, influenced by our fascination with other cultures and our traveling (past, and future travel plans).  As a family we eat everything from Kim-Chi to Som Tum (unripe papaya salad) to spiced lentil stews, and if you want to eat, you must eat whatever you have been served. 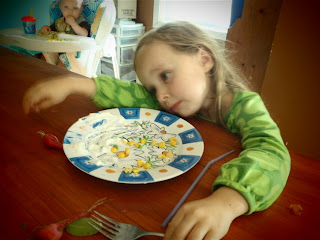 The other night, one of my younger kids was stuck at the table, slowly working away at her mixed vegetables (what could be so bad about that?) when all the other kids were running around outside, enjoying their ice cream for dessert.  The whole process seemed to exhaust her... and it's amazing how eating just a few peas, beans, carrots and corn can cause tears to flow and bad attitudes to flare!

Why must a child eat their veggies before consuming dessert?  I believe most adults would agree with me that it is a reasonable conquest.  We want our kids to firstly grow up healthy and strong and consume a variety of nutrients that are required to assist their immune system.  Secondly, to me, it is important that my kids are exposed to a variety of flavors and "learn to like" the foods that are especially good for them.  Lastly, I would prefer that my children can willingly gulp down whatever they are served - be it in my own home, or in the home of a friend! 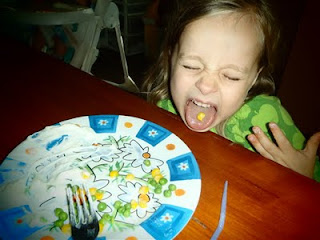 So ultimately, what I ask of my child is for her benefit.  I'm not trying to be mean and punish her.  I don't give her unreasonable amounts of "healthy foods" which she doesn't like.  I don't feed her turnips and rutabaga and collard greens all the time - but give her a variety of what I would consider some of the tastier veggies!

I can think of many other requirements which I place upon my children for their own good.  Some would include: a reasonable bedtime, learning to read and write, learning manners and good communication skills, and even the occasional bath or shower.  Speaking of showers, I also realized I have to make it a requirement to put on clean underwear afterwards, since having a 9 year old son has shown me that they just don't see that as a necessity.  (Unbelievable, I know!!!)

So I expect I will live through another decade or so of grumbling, as I encourage my children in some basic skills and characteristics until they plunge into adulthood and are "on their own".  I wish they could see it from my perspective; especially since it is frustrating and aggravating to have to constant beseech my children to do things that are for their own good.

I was spending some time reading the passage from our church service last Sunday, and found myself opening my eyes to a new burst of revelation concerning God's character towards his children.  First, let's take a look at the verses:

Mark 2:23-28
One Sabbath Jesus was going through the grainfields, and as his disciples walked along, they began to pick some heads of grain.  The Pharisees said to him, "Look, why are they doing what is unlawful on the Sabbath?"  He answered, "Have you never read what David did when he and his companions were hungry and in need?  In the days of Abiathar the high priest, he entered the house of God and ate the consecrated bread, which is lawful only for priests to eat. And he also gave some to his companions."  Then he said to them, "The Sabbath was made for man, not man for the Sabbath.  So the Son of Man is Lord even of the Sabbath."

One thing I think is so great, is that I love how Jesus always points out things to the stuffy, religious people with either questions or witty, puzzling remarks.  It's as though He turns the issue back onto those who feel they are so "studied" and forces their hand, making it an issue of the heart and not of the head.

What really spoke to me though, was the idea that "The Sabbath was made for man, not man for the Sabbath."  I've pondered the idea of Rest and Sabbath in previous blogs, and discovered how a Sabbath Day, by design, is meant to replenish and give time for communion with God and each other. (Communion, being defined as: association; fellowship and an exchange of thoughts, emotions, etc)

Basically, Jesus was confirming the idea that Sabbath wasn't a day made up by God so that He could garner our worship and force us to grovel at His feet, with extra time and consideration because of the certain day of the week.  He didn't make a Sabbath day so He could puff himself up and make us all feel guilty, like we should "act more holy" on this day, above all others.

Sabbath was made for our own good.  It was made for us to slow down and focus on what really matters in life, setting aside our work and obligations. This got me really thinking:  What are the obligations which we take upon ourselves that shouldn't be viewed as obligations, but something designed for us and intended to bless us?

It is so typical for us to take the wrong perspective, and in the same way that children react to their parent's expectations, we only see the work we have to do NOW, having little ability to visualize the future benefits of today's actions. I know that there is a lot of stuff that would be beneficial for me to do as a Christian, but I often feel grudging about it, and lack long-term perspective.  Most of all, I lack the perspective that God is asking me, not because He's GOD and He "says so", but because He loves me, and what He asks is for my benefit.

Next time I figure that I "should" do something, I'm hoping to have a little more foresight to consider the "why" behind my tasks.  It takes maturity to have the right attitude and perspective towards what could be construed as "more work", recognizing the meaning and benefits behind it all.  It will take a lot more maturity on behalf of my kids to recognize the benefits of eating their vegetables.  One day, I hope they will see it from my perspective though... and the cycle will continue as they wrestle with their own children!

Now, just for laughs, and a little nostalgia....  (you can skip the video forward to 1:30 to find the song I want to share).

Posted by happymummy at 1:36 PM