I can now add "stunt-double" to my list of accomplishments when asked to provide a resume for any future employer.  Seriously... I believe I have earned for myself a badge of accomplishment as far as being involved in a crazy (though fairly unnecessary) stunt and remaining mostly intact and, most importantly, alive!

I must admit, all my life I've been a stickler for pain and punishment.  As I've mentioned in other posts, I've been quite a tom-boy most of my life; the type of girl to pick at my scabs, run in the rain despite having pneumonia, hunt in sub-zero temperatures, and, more recently, live in an extremely unfinished home with my newborn and 5 other kids!  Give me a challenge, and I'm apt to face it head on and try to make it more challenging, somehow.  Case in point, I'm racing in my first half-marathon (22 km or 13 miles) on Sunday, after just about a year of getting into running.

Something seems to draw me into difficult situations, like wasps are drawn to a spilt slurpee on the sidewalk.  I don't like being told "you can't do that" and I do enjoy being seen as someone who can do almost anything.  Yes, I admit there is a measure of pridefulness that I should be more repentant of, and if it wasn't for my stubbornness and trying to prove my point, I might not do so many crazy things.

This recent "stunt", however, was not something I willingly submitted myself unto, and it revealed something within me that was surprising. 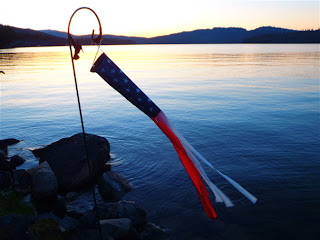 It was a notorious Fourth of July evening, on a beautiful, crystal clear mountain lake in Montana.  The previous day, we had stopped in a nearby city to purchase food and fireworks to compliment our celebratory days at the lake.  Every couple of miles, we'd see another trailer (or two) full of fireworks for sale, set up alongside the main roads of the city.  After shopping for food we stopped at a "wholesale fireworks supplier" amid all the other patriotic Americans who were stocking up for the big day.  I don't think my husband would be embarrassed to admit this, but he was like a kid in a candy store.  He strolled up and down the length of the trailer, scanning the shelves for the ideal explosives - the kind which are not available back on our tamer, more regulated Canadian soil; the kind which are responsible for emergency room visits from daring (and probably cocky) individuals who derive great pleasure from blasting and burning and blowing up things.  To give even more perspective on this wonderful, tantalizing yet calamitous event, I found the following statistic on the University of Rochester Medical Center website:

It’s a daunting statistic: More than half of the 11,000 annual injuries associated with fireworks and grill fires occur within the first week of July, according to the National Fire Data Center.

Yay!  What fun!  This wonderful holiday season in July was the most fantastic excuse ever for my pyromaniac husband to get himself into a competitive atmosphere of destructive, explosive spectacles involving gunpowder and FIRE!

In all honesty, I quite enjoyed the sparklers and pretty colors of the smoke bombs and various smaller fireworks.  I didn't care quite so much for the noisy firecrackers that blasted loudly and repetitively and succeeded in making our toddler cry in fright.  Later on in the evening, however, I tucked our youngest (18 month old baby) into bed, hoping that the cabin walls would be enough to deaden the sounds of our raucous celebration.  (Thankfully, he slept soundly through the night!)

As the dusk covered the mountain sky, the displays of fireworks became greater, louder and longer all along the homes of those who lived and vacationed at the lake.  We happened to be celebrating with a fairly young crowd, including a group of guys with obviously dangerously high levels of testosterone; as testified by their daring behavior.  One of the 'coolest', yet clearly audacious things they would do, was to light a smaller firework in their hand, then, at the right moment, throw it out over the lake so it would explode mid-air, shining and sparkling over the water!  Of course, right among that crowd was my wily husband - although for most of the evening he was occupied with lighting smaller, tamer fireworks for the kids - firecrackers, smoke-bombs, "bees", and "UFOs" to name a few.

I was happily toasting myself near the bonfire with a bunch of the children and the 'more sane' of the adults, when a commotion drew my attention to the dock.  I heard my husband yelling "Oh shoot!" and could vaguely see several of the guys scrambling frantically away from the dock.  There was a sparkling, newly lit firework in progress where the guys were, and suddenly the sound of booming explosions began.

"Ruuuuuuunnnnn......" yelled one of the guys - and a stampede of onlookers, in a state of panic, began to turn from the glorious sight of bursting fireballs, and run towards safety.  In that instant, it was obvious that something was terribly wrong, as the fireworks were blasting not up into the sky, but parallel to the ground, towards the spectators!

My adrenaline surged and I had but one thought: escape!  Amid the noise and chaos, I ran a couple of feet towards the cabin, only to stumble headlong into a Powerwheels jeep - slamming my knees into the frame and landing across the metal roll-bar with my ribcage while jarring my already sore wrist (which I had hurt the previous week while learning to rip-stick).  At that moment, this could have been mistaken for a Hollywood set - only the colorful fireworks should have been plain white; emulating the blasts from grenades and bombs as the soldiers and innocent civilians (me) dove for cover from enemy fire!  I literally had the air knocked out of me, and felt lightheaded as I untangled myself from the jeep and crouched on the ground.  There were a few more blasts as the final explosions took place, and then, when it became apparent that the crisis was over, there were loud guffaws and nervous laughter as the guys reveled in their survival of a potentially perilous extravaganza of masculine entertainment.

I sat in a bit of a daze, feeling slightly miffed at the event and wondering who was the brains behind such a obstinate act of disregard for the safety of innocent bystanders.  Then my mind suddenly cleared as I heard the voice of my 3 year old calling for me and I realized that I had plunged to cover with no regard for my darling children and the potential threat to their well being!  What sort of mother was I?  For those moments, I became purely instinctive, allowing the adrenaline to direct my body in panicked self-preservation.

My son came over to me and cuddled onto my lap as we sat on the grass.  "That was loud, Mommy!"  he proclaimed.

I slowly caught my breath and found myself strangely tired and feeling weary at the idea of more fireworks and festivities.  My husband came jogging over to me, and with a gleam in his eye, exclaimed:  "Did you see that!?  I was in the middle of exploding fireworks!"  He had a maniacal sort of grin on his face, and went on to profess excitedly: "That was crazy!"

Then he noticed that I was dull, quiet and seemingly shell-shocked.  "What's wrong?"  he asked, puzzled at my lack of jubilation.

I sighed... not entirely wanting to be a spoil-sport, but needing to be honest about the situation.  "I ran for cover and fell and hurt myself" I explained, lamely.

"Oh...I'm sorry" he apologized.  He went off to join the guys as they searched for the rest of the surviving fireworks available to explode, completing the evening's show.

I felt a growing sense of disdain for the careless young guys who foolishly caused terror and mayhem (resulting in me getting hurt)!  As much of a daredevil that I am, this situation had been out of my control and I was left feeling guilty for my lack of care and concern to my children in a time of danger.

Not too much later, everything that could have been exploded had been lit up and there were no more noisy combustibles left to deploy.  I herded the children off to the cabin, to tumble in contented exhaustion into bed after a long, exciting day and evening outdoors.  I was more than willing to tuck myself in as well; easing my battered and bruised body onto the soft mattress, and tentatively resting my sore, swollen wrist on some bunched up blankets beside me.  We survived the fourth of July...

The next day, after counting my bruises and deciding that they made decent war-wounds to commemorate our active vacation, my husband and I were discussing the previous evening's events.  As I listened to his colorful description of the "disastrously amazing explosion", I suddenly came to the realization that it was my husband, not one of the juvenile hooligans who had been the cause of my suffering and near-heart-attack!  With a sigh, and a sense of resignation to our lifestyle of adventure and danger, I found myself slightly proud at his antics, while maintaining a hint of anger, considering the wounds which I had suffered.  Apparently, he had innocently tried to light one firework, when some sparks flew and lit some of the other fireworks next to it.  In an attempt to stop a disastrous situation, he tried to push the sizzling, sparking tube off of the dock and into the water, but only succeeded in knocking it sideways so it was aimed at the crowd on shore.  This was when the explosions began, and the only option left for the guys was to run (and scream at the crowd to run for their lives)!

"Well, I'm glad you had fun."  I consented to him, trying not to encourage this sort of behavior, yet not wanting him to feel guilty, either.

That concludes the story of our Mayhem in Montana.  I'm not sure if I learned much of a lesson from our short stint of celebrating with patriotic Americans.  As I said before, what surprised me the most, was realizing that in the face of panic and danger, concern for my well-being outweighed concern for my children.  I've often engaged in that sort of "every man for himself" attitude when it comes to sports, and it's no surprise that I prefer solitary, endurance-related activities.  Perhaps I need to work more on a sense of partnership and team-spirit - especially when it comes to my family!  Anyway, I guess not everything I write about needs to teach a life-changing lesson.  At least I'm left with a life-long memory... 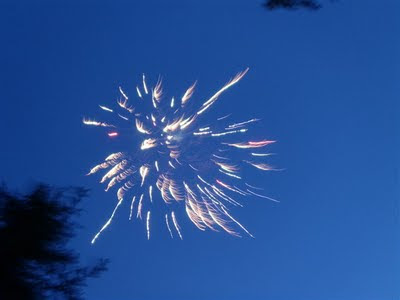