My heart was pounding and my hands were clenched tightly together.  I was terrified.  I wanted to run away and I couldn't.  I wanted to hide and there was nowhere to go.

All week long I knew this moment was approaching, and my stomach was tied up in knots.  I felt nauseated at the thought of what was to come, and felt powerless to do anything about it.  Worst of all, it felt like it was my own dumb fault that I was in this predicament.

I shut my eyes tightly and tried to calm my breathing as the long, sharp needle made it's way towards my face, and straight into my mouth.  "Just a little pinch!" the young dentist warned me, cheerily.

I tried to think of other things and even resorted to counting the tiles on the ceiling as this young, 20-something, baby-faced dentist wielded sharp objects around my tender mouth.  He must have just graduated from dentistry school and I think I even saw a zit on his cheek!  What is this world coming to, where people younger than myself are considered "professionals" and able to preform intricate, invasive procedures on my sensitive mouth!

"I'm just going to use this instrument now, and it may wiggle a bit" he explained next, before drilling noisily into my back molars.

This whole procedure actually brought me back to my childhood, in a way.  I remembered hanging out in my dad's garage while he worked on one of his numerous vehicles.  He would often buy what others would consider a "junker" and fix it up; inside and out.  I remembered how he would work away, sanding and blasting the rusted out areas of the car's body.  The sound of metal being polished as the rusted areas were ground to bits was loud and almost terrifying.  It gave a high, whiny sounding squeal as dust and metal particles flew through the air.  My dad was always dressed in his blue coveralls, a baseball cap, protective goggles and one of those disposable painter's masks.  He would intently concentrate on his work, sometimes working past midnight in order to get the job done.  Sometimes my brother and I would watch him and "help", handing him tools from time to time, but mostly, I think he just wanted company.  Occasionally, as a helper, we'd get to join him for a late-night treat at McDonald's or Tim Horton's for a snack.

Anyway, back to my teeth... the whole image of my dad doing auto body work did nothing but erode my confidence in the procedure.  So I tried to concentrate on other things, but mostly, I was just anxious for it all to be over.  I was also feeling panicked about just how much this would cost.  My husband had told me that we no longer had any medical coverage, and I tried to prepare myself for the worst, thinking of the hundreds of dollars I'd likely have to lay down for this painful experience.

I was getting very tense again, so obviously, thinking about money was not the way to take my mind off of the situation.  I vainly turned my thoughts to the fluffy blue clouds in the sky, and tried to imagine our future summer vacation (where we'd be eating cornflakes and KD because my dental work was going to cost us a fortune!).

Somehow, I got through the procedure with only a few moments of gagging and choking on the cotton they stuffed into my mouth, alongside my tongue.  Next step: billing.

I sank into the seat, across from the perky administrator, and dejectedly pulled out my credit card.

Moments later, I was given a paper to sign, and told that since my plan covered 80% of my dental work, I only owed them forty dollars.  "My plan???"  I said, still mournful and yet quite puzzled.  "We're not supposed to have any coverage anymore."

"Well," the receptionist said, "I already put it through the system and it was approved.  Also, one of your fillings that we had to re-do was less than a year old, so it is under warranty and you don't have to pay for it."

I quickly signed my papers, paid the minuscule (compared to what I had expected) bill, and walked out to my vehicle, pleasantly stunned.  It felt like a miracle - what were the chances that our "supposed to be terminated coverage" was still covering us!?! Obviously someone had delayed shutting down the account and we were still recipients of dental benefits!  I was overjoyed, and all the worry and despair about money that I was previously dealing with, washed away.

Something about this whole experience reminded me of how we deal with and encounter painful issues in our hearts. First of all, the type of cavity I had was one that had perforated a hole in my tooth from the inside out.  Basically, (due partly to my wretched craving for sweets) a cavity was forming inside my tooth, just under the weak, barely damaged surface.  Eventually, the surface broke and a hole was revealed.  This is why the whole issue seemed to spring on me suddenly - I had no idea what was lurking beneath the surface of my weakened tooth - it just suddenly became ultra-sensitive and had a gaping hole in it.  The dentist had to work away at  the grime and decay before filling it up, and making it look almost as good as new.  Thank goodness for freezing that made the entire left side of my mouth, including my tongue, numb and feeling slightly swollen.  I hate to think of how back "in the olden days" people would just suffer a cavity until it finally was yanked out with pliers!

This made me think of how we sometimes have painful issues buried deep in our hearts.  We can avoid the pain and even exist for a long time without letting it really bother us or affect us in our daily lives.  Given enough time, however, these problems tend to fester and grow and eventually cause lasting damage that needs a solution and repair.  I began to think about some of the areas in my heart that I tend to gloss over, protect and even ignore.  What I really need to do, and what will cause me greater blessing (and far less pain) in the long run, is to expose these areas to the one who can truly fix them.  As I ask God to work in the "rotten" and hurting areas of my life, I need to be prepared for a little bit of discomfort.  It hurts to let go of regret, and it hurts to face your fears and pain.   What is required, however, is to counter your instinct to run away and hide, and be willing to remain open and soft.  Given the choice between having it all together, and a hardened heart - or, falling apart a little bit and being soft-hearted, I'd pick the latter.  Those who are soft and open may be more susceptible to hurt, but they also are more compassionate and far more open to love.

Not everything about your relationship with God is meant to be mushy and gushy and pleasant.  He is in the business of restoration, and like any tooth - or automobile, a certain amount of pain is required to clear the area out before it is reconditioned and rebuilt.

You can be sure that what you surrender to God's hands will be well taken care of.  He is Comforter, Healer, Savior and the most compassionate Father.  He truly cares for his creation and although, at times, He seems to administer "tough love", it is all with the desire to see us whole, complete and lacking no good thing. 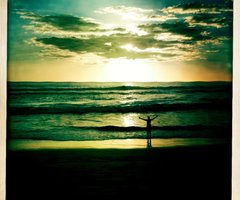 For the Lord God is a sun and shield; The Lord will give grace and glory; No good thing will He withhold From those who walk uprightly.  O Lord of hosts, Blessed is the man who trusts in You!  -Psalm 84:11