Bad Golf and A Radio Interview

Yesterday, my husband called me up from work and the first thing he said was: "Do you want to be famous?"

"NO!"  I instantly replied.

I heard him chuckling on the other end of the line, and my mind was racing and fitting puzzle pieces together, trying to guess what sort of plight he had roped me into.  Soon enough, he revealed that there was a last-minute cancellation for our local Christian radio station's morning show, and they would like to interview me and hear about the Cartons 4 Kids project I'm working on for India.

If it was anything else.... I may have just skipped the publicity all together.  I'm not keen on having to talk cleverly and clearly in front of an audience (albeit an invisible one), especially first thing in the morning!  However, this was for such a good cause; something so close to my heart - a project that I had birthed and wanted to see succeed.  As they say "it's for the kids" and not just regular kids, but children who live in a slum!  I agreed to do the interview, not without some fear and trepidation in my heart.

Fortunately for me, I had little time to worry and fret about my "moment of fame", since we had a house full of company last night and I hardly had time to sit until it was time for bed.  Then, when everything was still, and I could hear my husband's gentle snores, and not a creature was stirring, not even one of the 8 children that live in our house.... I could not sleep.

I tossed and turned and my efforts to get comfortable were in vain.  Every now and then, I'd roll over and, with disdain, note the time on my clock - the red numbers glaring at me accusingly as I evaded rest.  I rehearsed my thoughts for the radio interview out loud, whispering to myself and trying to make everything sound clear and professional.  Finally.... the nerves settled and I drifted off... to sleep... 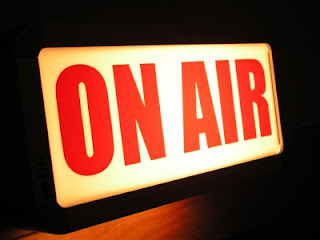 Of course, I began to dream about my interview; and in my dream, I forgot my notes and was frantically wondering if we should drive home and get them - but then we'd be late and miss it entirely!  Then I heard the whiny, half-hearted cry of my toddler, and I wondered why we had brought him to the radio station.  How would I concentrate on the interview?  There was no way he'd stay quiet!  Then I was back in my bed, the sheet twisted around my legs, and one of my feet was cold, having slipped out from under the covers.  I was in my room, it was 6 am, and my toddler really was crying.

I comforted him for a few minutes and climbed back into bed.  This time sleep came easily, and I was mostly concerned about not being groggy in a couple hours when I did the interview for real!

Of course, Murphey's Law kicked in and I was woken up a half hour before my alarm was due to go off, thanks to my 3 year old.  I got him re-settled, then crawled back into bed and tried to doze a little before "go-time".

The actual experience of doing a radio interview wasn't so bad.   We made it on time, and I did remember to bring my notes.  One friend advised that I merely talk to the announcer, not to my city.  That made sense and I tried to ignore the big orange-muff covered mike in front of my face, and concentrate on the friendly gentleman in front of me, instead.  Although I had been sipping on coffee, my mouth felt strangely dry, like it had been swabbed with cotton balls.  Yet I managed to get my point across, and I don't' think I missed any important details.  Ten minutes was over before I knew it, and suddenly I was picking up my notes, and walking out the door with my husband.

It's amazing how adaptable one becomes in a moment of necessity.  I could have asked my husband (you know, the preacher who stands in front of a large crowd week after week, spouting revelation and wisdom to us with wit and conviction) to do most of the talking, but I knew that I was the one who had the facts and the passion to propel this mission.  So I stretched out of my comfort zone, and rose up to the challenge.

What I think is weird, is how you almost feel like you're being a different person when you do something new and unexpected.  In a way, it almost feels like you're being "fake" because your actions feel so out of character.  Yet, if I always relied on my feelings about what I was going to do, then I probably wouldn't be married, wouldn't have kids, and wouldn't be very happy!

The other night, a group of us went mini-golfing.  It was loads of fun, only I'm quite a terrible golfer.  Try as he might, in the past my husband attempted to instruct me on a proper swing, but I just ended up getting frustrated and it didn't seem to work!  This time, I noticed he didn't give any advice (maybe he'd given up on me) and I just tried to golf in my own crazy-misfit way.  I found it awkward, however, to be doing something that I wasn't good at.  I'm used to working hard, and seeing my efforts be rewarded with "being good at most anything".  I am usually successful at what I do (although I admit there are a few things I choose not to do, because I know I would suck!).

In light of my clumsy golf skills, I spent the evening making a bit of a spectacle of myself, swinging wildly and landing the ball in the stream that ran through the course not once, but twice!  The only way I could avoid being terribly frustrated and wallowing in self-pity about my inability, was to laugh.  Laughter and all-around goofiness was a far better response than anger and embarrassment, I thought.

So, over the course of the last week, I've encountered situations that required me to tackle what could have been perceived as awkward situations.  What is the secret?  Well, to be honest, the only thing I recommend is that you perceive life as one big adventure and seek out the joy in that adventure.  I dare not live a life of fear and regret.  What is first considered a challenge can potentially become a skill or success.  Although it may seem out of character, and feel uncomfortable at first, I feel it is better to look at life with a reasonable sense of logic.  Many times we say "no" because we fear humiliation or failure.  What we often don't realize is that firstly, it is important not to take yourself so seriously.  Also, you must not forget that those who love you and are committed to you won't leave you forsaken!  My husband sat in a chair beside me throughout my whole interview this morning - not because he felt I was incompetent to complete this task, but because he believed in me and wanted to support me.

I might not really improve my golf swing in the near future - but I'll keep laughing as I play.  I'm also (sort of) looking forward to the next challenge that pops up - my knees might be knocking together, but I'm ready!
Posted by happymummy at 4:04 PM