I have always wanted to run away from home.

I'm serious!  Almost as far back as I can remember, there were plans made, partially carried out, but never totally completed as I sought to run away.

I remember when I was about 8 or 9 years old, and I was fed up with living in a city and seeing my dad work long, hard hours all the time.  I didn't have the freedom to run wild in wide open spaces, and I figured I should run away and live in the woods somewhere.  I believe I had just finished reading "My Side Of The Mountain" by Jean Craighead George, in which a young boy leaves his city life, runs away and "lives off the land" by himself for many months.  At any rate, I was convinced that my life would be so much better, and that I wouldn't have to deal with people who didn't like me or didn't understand me, if I could just be one with nature.  I packed a backpack, stuffing in a blanket and pillow and a few articles of clothing, and started the trek down to the corner of my block.

Once I reached the crossroads (at the end of my block) - the place where I would have to decide North or South; left or right, I paused and began to consider my "running away idea" a bit further.  For one thing, the weather wasn't the greatest at the time.  Also, supper was in an hour, and I was hungry.  I made some halting steps forward, attempting to plunge into my new life of "wilderness girl", then I would reconsider and turn back towards home -  until, finally my appetite and reasoning took over and I sheepishly sneaked my things back into the house and gave up on the idea altogether - for the time being.

By the time I was 12 or 13, and filled with teenage angst, feeling that my parents "sucked" and didn't understand anything (ha ha... now I'm the parent, and I see things a little more clearly!) I began to plot my escape from home once again.  This time, a friend and I planned to run away together.  We made our elaborate escape plan, talking of how we'd jump onto a Greyhound bus, and go to Vancouver, where her dad lived.  Everything would be better there - we could have brand new lives and be whoever we wanted to be.  Life would be one big party.  Time and time again, we devised our perfect get-a-way; how I would tell my parents that I was sleeping over at her house, and she would tell her parents that she was at mine- then we would escape!  Somehow, we (thankfully) never had the guts nor the money to go through with the plan, and although something in me desperately yet foolishly desired to run away, I didn't follow through.

A couple years later, when I was 15, the plot thickened.  I was on a church youth mission trip to England and Scotland, and I was still a mixed up, misunderstood teenager who just wanted to get away.  While it was a relief to be so far from home, in a foreign land where everyone spoke with charming accents, I dreaded returning to my life back in Canada.

We were waiting for a train -  piles of baggage spread out in the terminal, with tired teens stretched out; some snoozing with their heads resting on their backpacks.  I remember eating a delicious peanut butter-chocolate ice cream bar, and gazing out at the enormous trees in the distance and the gorgeous brick and stone buildings.  And I thought to myself:  I could just walk away right now.  I'll just take my backpack, pretend to head towards the loo (bathroom) and I'll disappear.

Really, one of the only things that held me back was the idea of just how much trouble my youth leaders would be in once it was found out that I was gone.  I wasn't so self-centered to think that my actions wouldn't result in consequences beyond myself, and I didn't relish the thought of these innocent youth leaders being torn apart by my dad (with his bare hands).  So I couldn't go through with the escape.  After another few days of adventure, I was homeward bound - back to my world, my life... back to me.

Somehow, I grew up a little, matured a little and adjusted to my life.  Instead of running away from home, I began to go for jogs and would run away - even just for an hour or so. 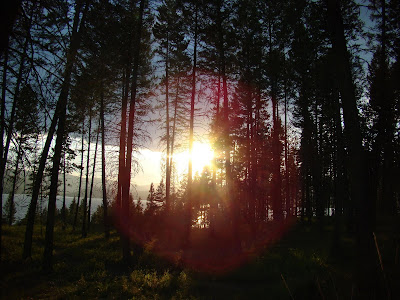 Eventually, I was "grown up" and in my first year of Bible College and I met a guy.  Well, I didn't meet him there - in fact, I'd already known him for a few years, but I suddenly saw him with new eyes.  So the dating began, and the intimate conversations and opening up my heart - learning to trust.  One weekend, he took me home to meet his family.  By this point we were quite "serious" and knew that this was no ordinary friendship, but one destined to be life-long.  Amid the noise and laughter and chaotic abundance of family, I felt small and intimidated.  His family was larger than mine, and having 3 boys in the family (and one older sister) caused plenty of ruckus and activity.  After a rather loud family dinner, we sought to get away and have some time to ourselves, and I think my sweet boyfriend wondered what had made me so moody.  We went for a walk on the quiet streets of his sleepy home-town, and I told him how overwhelmed and intimidated I felt.  Something inside me felt scared - scared of this bursting forth of emotions and conversation that flowed easily, without hesitation.  My family wasn't really like that.  We were quiet, civilized, reserved.  We didn't have yelling matches (camouflaged as friendly debates) at our dinner table.

And then, I played the "immature girl" card and I ran.  I took off from my befuddled boyfriend, legs stretching and feet rhythmically pounding on the bumpy, semi-rural road as I tried to escape something... attempting to run from the feeling of  vulnerability that accused and intimidated me.

The very one who I should have trusted the most, said that my actions scared him - suddenly I was like a skittish colt - wild, terrified and on the run.  When I finally settled my tumultuous emotions, I turned around and headed back to the one who wanted to understand me and care for me.  I found him: walking the streets searching for me, and praying for me.  He held me close and made me promise to never run away from him again.

When I married my best friend, 10 months later, I promised to stay with him forever, and I put my running shoes away (for a while).

Still, occasionally I have the fleeting thought to run away from my life.  I might be simply headed out on a grocery trip, the kids left at home with their dad, and me - alone for the moment; away from the needy, away from the weight of responsibilities.  Something will pop into my head and say:  Just take off!  Grab some cash from the ATM and disappear!  RUN!!!

But I don't.  I know better.  I know that I can run as far and as long as I want, but I will always have myself to contend with.  I now know that this "runaway" tendency comes from within and not from my circumstances.

This runaway heart has been seeking contentment for a long time.  I've learned that contentment isn't found in the car you drive, the neighborhood you live in, the body-type you struggle to maintain (or attain) and it isn't even found within any human relationship - because people just can't meet all your needs; they can't be your savior no matter how badly you may want them to be that in your life.

Who can whisper calm and quiet into my racing heart?  Who can vanquish the whirlwind of fear and discontent that threatens to drown me time and time again?  Who can stop me from thinking that the only answer is to run away?

Ironically, I have been finding the answers when I run.  No, I'm not running away anymore, rather I'm running to:  I run to escape my worries, and to find the calm of Almighty God's presence.  I run to find quiet in my soul.  I run to simply be set apart from my thoughts, my selfishness and my puny perspective - to find peace, sanctity and refuge.

I run for dear life to God, I'll never live to regret it.  Do what you do so well: get me out of this mess and up on my feet. Put your ear to the ground and listen, give me space for salvation.  Be a guest room where I can retreat; you said your door was always open! You're my salvation - my vast, granite fortress    -Psalm 71:1-3 The Message

Something inside me will always be a runaway.  But now I run with purpose; I always return home, and I never come back feeling the same as when I left.
Posted by happymummy at 4:20 PM